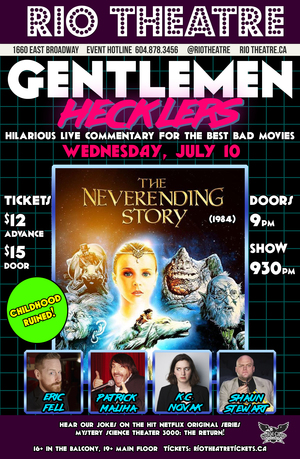 On Wednesday, July 10, Vancouver's Gentlemen Hecklers return to riff on one of the most beloved fantasy adventures of the 80's... THE NEVERENDING STORY! Prepare to have your childhood ruined (or explained in an entirely new way) with a fantastical movie about an 80's kid whose day off school involves a flying luck dragon (as opposed to, say, a Ferrari), a sinking horse, an ancient turtle, and a lesson about how the spread of malaise and lethargy can lead to... a bunch of nothing. Rediscover your childhood have on the big screen, among friends (and fellow "Moongchildren"), mildly inebriated (probably), and with the Gentlemen Hecklers on hand to provide live, hilarious commentary.

Barett Oliver stars as a young boy named Bastian, who decides to duck into his local bookstore to avoid bullies one morning while on the way to school. He managers to sneak away with (rather, steal) a strange-looking book called "The Neverending Story," which he begins reading in the school attic while avoiding class. The novel is about Fantasia, a fantasy land threatened by "The Nothing," a mysterious darkness that destroys everything it touches. As he reads further, he learns that the kingdom of Fantasia needs the help of a human child to survive, and when he reads a description of himself in the book, his day off school turns into something else entirely... Also starring Gerald McRaney, Noah Hathaway.

Over the past six years, The Gentlemen Hecklers have built up a loyal cult following in Vancouver, and recently brought their talents to a wider audience thanks to the critically acclaimed Mystery Science Theater 3000 episode "Cry Wilderness" on Netflix.

*Sorry, Rio Theatre Groupons and passes not accepted for this event.
**Minors permitted in the balcony. (Language warning.) Must be 19+ w/ID for bar service

THE NEVERENDING STORY While hiding from bullies in his school's attic, a young boy discovers the extraordinary land of Fantasia, through a magical book called The Neverending Story. The book tells the tale of Atreyu, a young warrior who, with the help of a luck dragon named Falkor, must save Fantasia from the destruction of The Nothing.