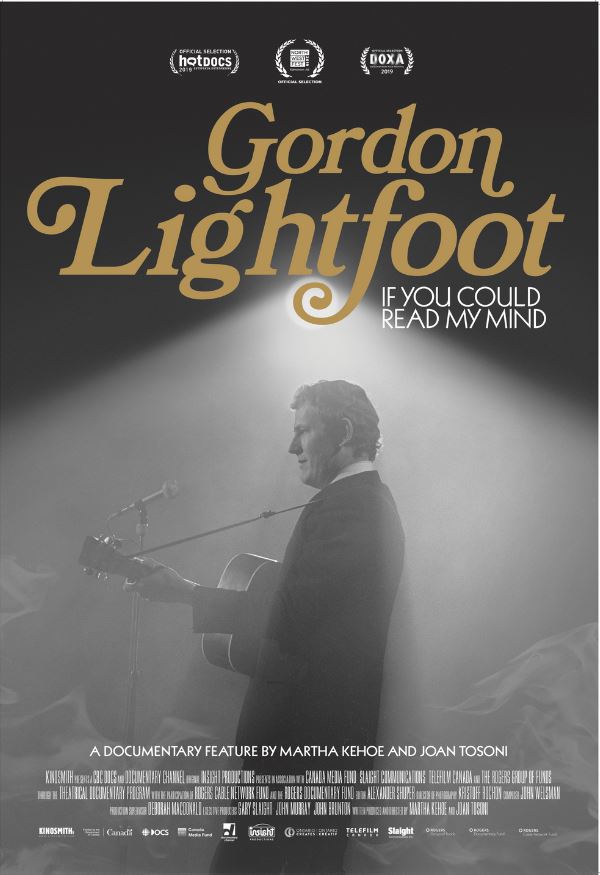 Gordon Lightfoot: If You Could Read My Mind

Produced, written and directed by Martha Kehoe and Joan Tosoni, Insight Productions' feature documentary GORDON LIGHTFOOT: IF YOU COULD READ MY MIND is an exploration of the career, music and influence of legendary Canadian musical icon, Gordon Lightfoot. With unprecedented access to the artist, the film takes audiences from high school auditoriums in straight-laced, small town Ontario in the 50s to the coffee houses of Yorkville and Greenwich Village in the 60s, through Lightfoot's turbulent, substance-fueled arena shows of the 70s, and finally to the artist in present day.

The documentary features interviews from many notable voices in the music industry including Lightfoot's peers Ian and Sylvia Tyson, Randy Bachman, and Steve Earle; famous fans Alex Lifeson and Geddy Lee (Rush), Alec Baldwin, Anne Murray and Sarah McLachlan; as well as behind the scenes stories from members of his longtime band. Following Lightfoot's evolution from Christian choirboy to troubled troubadour to international star and beloved Canadian icon, GORDON LIGHTFOOT: IF YOU COULD READ MY MIND is an intimate and emotional examination of the artist's profound relationship to his music and his Canadian roots.

"At 80 years old (and currently recording another album), Gordon Lightfoot continues to entertain and enlighten. Personal archive materials and studio sessions paint an intimate picture of an artist in his element, candidly revisiting his idealistic years in Yorkville's coffeehouses, up through stadium tours and the hedonistic '70s. Elvis Presley, Johnny Cash and Barbra Streisand are only a handful of the stars whose recordings of "Early Morning Rain" and other hits helped Lightfoot's artistry leap across borders, but no matter how far his music travelled, he continued to write passionately about the country he called home. As fellow music icon Burton Cummings sums it up, "Gordon's stuff screamed Canada." With his instantly recognizable voice and masterful guitar playing, Gordon Lightfoot remains influential and timeless." (Hot Docs)

"The fascinating thing about GORDON LIGHTFOOT: IF YOU COULD READ MY MIND is the way that one of the greatest storytellers in the history of pop music—Canadian or otherwise—seems at once totally open, and yet at the same time leaves one thinking there’s plenty going on inside that he’s never going to share. What ultimately emerges is a picture of a deeply conflicted and perhaps tormented artist, whose life includes a long path of failed relationships and the profound regrets that come with them. No matter how big a Lightfoot fan you might be, you’ll learn things to the point where you’ll never listen to the timeless “If You Could Read My Mind” the same way again." (The Georgia Straight)

*Minors permitted in the balcony! Must be 19+ w/ID for bar service and main floor seating.
**Rio Theatre Groupons and passes OK. Please redeem at the door.

GORDON LIGHTFOOT: IF YOU COULD READ MY MIND (Martha Kehoe and Joan Tosoni, 88 mins / 2019 / PG) The iconic Canadian musician, Gordon Lightfoot, reflects on his life and career.