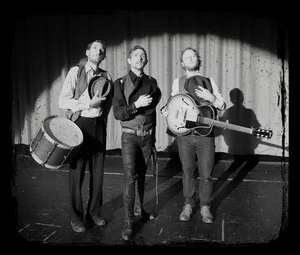 What happens when an actor writes a musical album? An album release performance of theatrical proportions!

The story goes – there is a legendary woman, beloved of an assortment of songwriters through the ages, who broke so many hearts, destroyed so many men, and the only record of her is a series of lost songs dedicated to her. But who was she?

Hell Of A Girl: The Release will take the audience through the strange lives and mysterious deaths of a string of fictitious songwriters from country blues of 1915, to a german cabaret in 1941, to a rockabilly band in 1954, ending with a 70’s funk dance party.

Jeff Gladstone and The Bad Ideas weave together songs about forbidden love and lost minds, with Steve Charles (The Fugitives) on guitar, Todd Biffard (Maria In The Shower) on drums, and Tyson Naylor on piano. Other musicians to be featured in the show include Onalea Gilbertson (One Yellow Rabbit), Kelly Haigh & The Murderbirds (featuring Jimmy Roy & Patrick Metzger), Bruce Horak (Assassinating Thomson), Catriona Murphy (Mary Poppins) and many more!

On April 19 enter the world of Cowboy Noir.

“Jeff is the only person I’ve seen who can flirt with the entire audience at once.”
- Catriona Murphy, actor & violinist