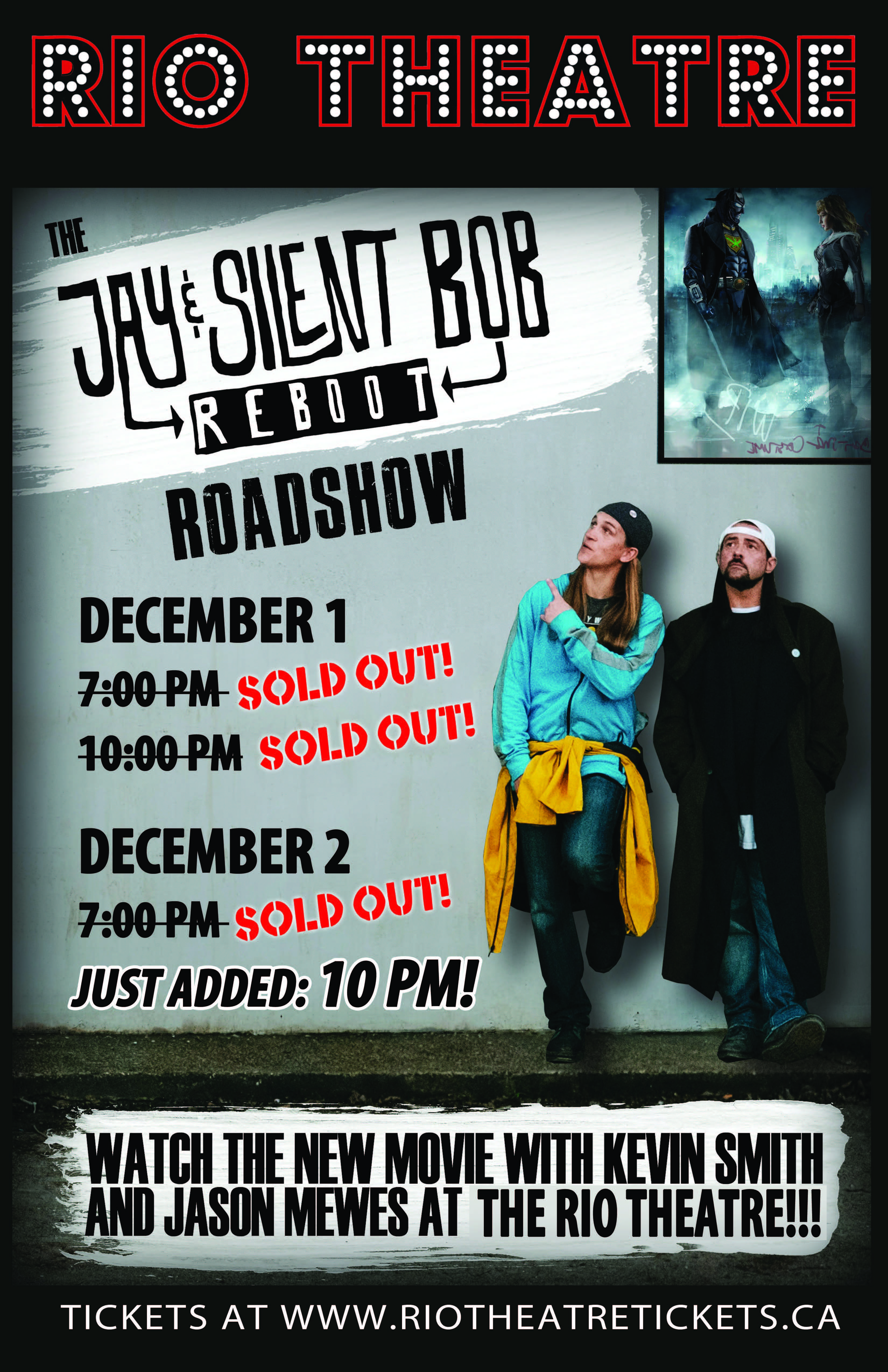 Jason Mewes and Kevin Smith are headed to Vancouver's Rio Theatre to show their latest and greatest motion picture, the star-studded JAY AND SILENT BOB REBOOT. The New Jersey stoner icons who first hit the screen 25 years ago in CLERKS are back!

When Jay and Silent Bob discover that Hollywood is rebooting an old movie based on them, the clueless duo embark on another cross-country mission to stop it all over again!

Advance General Admission Tickets $50
On sale Friday, August 2 at 10:00 am

*Minors permitted in the balcony. If there are minors in your party, please ensure you purchase the correct balcony ticket option.
**Must be 19+ w/ID for bar service and main floor seating.
***Sorry, Rio Theatre Groupons and passes not accepted for this event.

Cinema icon, Jason Mewes, is perhaps best known as the potty-mouthed vocal half of JAY AND SILENT BOB, the on-screen comedic duo who first appeared in Kevin Smith’s seminal 1994 indie film, CLERKS. Mewes would reprise his role as the celebrated character five more times on the big screen from 1995 to 2006, in films including MALLRATS, CHASING AMY, DOGMA, ZACK AND MIRI MAKE A PORNO, and JAY AND SILENT BOB STRIKE BACK. His character would become a sort of James Bond of the mid-90’s low budget film – a fast talking, foul-mouthed, over-sexed, but ultimately harmless and likeable guy. For his successful and brow-raising portrayal, MTV honored him with 2007’s Dirtiest Mouth Award.

With cult-fans following his controversial antics, Mewes has captured audiences with his rebellious banter against his unspoken other half and longtime friend, Kevin Smith (Silent Bob). Since the beginning of the duo’s offbeat work together, Mewes and Smith have continued to build on their beloved character driven roles from the JAY AND SILENT BOB series. Most recently, the duo just wrapped JAY AND SILENT BOB REBOOT, an upcoming comedy film that is a spin-off of the lighthearted 2001 parody, JAY AND SILENT BOB STRIKE BACK. The duo returns to Hollywood to stop the reboot of ‘Bluntman and Chronic’ movie from getting made.

Jay can now be seen touring comedy clubs across the country with his solo show, “A-Mewes-ing Stories,” where he shares stories about his life and encounters over the years. For a complete list of dates, please visit http://www.jmewes.com/live/.

Outside of his work with Smith, Mewes has starred in the Wunderkind Pictures feature, NOOBZ, an indie “gamers” film about four friends and Gears of Wars players who embark on a quest to survive a road trip and win a Gamecon Championship. Mewes also appeared in the film, ROCK JOCKS, about a group of dysfunctional government employees who find themselves responsible for shooting down an asteroid on track for the Earth. In 2010, he appeared in the mobster comedy, THE LAST GODFATHER, alongside Harvey Keitel and Blake Clark. Most recently, he has guest starred on several television series including The Flash, Hawaii 5-0 and Z Nation.

This year, Mewes has also been using his Facebook page (@JayMewes) to live stream himself playing sponsored video games like “Fortnight” a few times a week.

Kevin Smith has been saying silly cinematic shit since his first film CLERKS, released way back in 1994. He had a heart attack and almost died last year but survived solely so he could direct his magnum opus, Jay and Silent Bob Reboot. A polygamist, he’s married to both his wife Jen and podcasting.