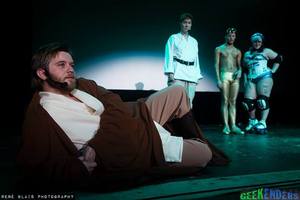 Star Wars: The Empire Strips Back A Burlesque Re-Imagining

Star Wars: The Empire Strips Back
A Burlesque Re-Imagining

A sequel to this winter’s smash hit!

Tickets:
$20 pre-sale general admission Ticket. $25 at the door.
Get your tickets in advance to guarantee entry!
https://riotheatretickets.ca/

Celebrate Star Wars Day (May the Fourth be with you!) with Geekenders!

We invite you to continue the Star Wars saga with us, as we journey from Hoth to Dagobah and Cloud City. With giant Tauntaun puppets, Wampas that attack to the dulcet tones of nineties rappers, and a droid love story that has to be experienced to be believed, The Empire Strips Back is bigger, better and more fantastical and sexy than anything Geekenders has done before!

Explore the world of Star Wars through theatre, comedy, dance, and (of course) burlesque! View the trailer for Star Wars: A Nude Hope on Vimeo here: https://vimeo.com/81903907

Featuring a cast of twenty-four of Geekenders all-star nerdlesque performers, the event and theatre troupe is pulling out all the stops to ensure a memorable, sexy, nerd-herding night for geeks of all types.

With the Storm Troopers

SPECIAL THANKS TO THE RIO THEATRE!
http://www.riotheatre.ca/