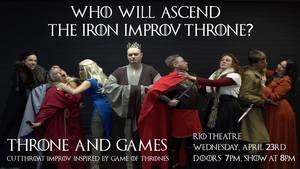 Tickets: $7 in advance, $10 at the door
Advance tickets: www.riotheatretickets.ca

19+ only with bar service. Please bring 2 pieces of ID.

Laughter is coming... this spring to the Rio Theatre. On April 23, journey with The Fictionals Comedy Co. on a comedy adventure of CutThroat proportions. Inspired by HBO's Game of Thrones and George R.R. Martin’s A Song Of Fire And Ice, we present THRONE AND GAMES!

The Iron Throne of Westeros sits empty, as several noble houses wage civil war for the right to be king. Though swords are the weapons of choice in the book and tv show, Throne And Game players will battle with cutting wit in a competitive improv show.

Will Rob Stark and Lady Stark claim the throne, The Lannisters reign supreme, or Khaleesi and Jorah rule over all? YOU, the old gods and the new, will decide once and for all (at least for this first show), so come on down to the Rio Theatre and make your voice heard!

This show is perfect for both huge fans of Game Of Thrones, and those who have never seen the show but are curious about the pop-culture phenomenon. Plus come dressed up in your finest Game of Thrones costumes and be prepared with your trivia knowledge for a chance to win some sweet prizes!

Here's what people are saying about The Fictionals!

"Some day I'm going to put a sword through their eyes and out the back of their skulls." - Arya Stark

"Those are brave men and women performing onstage. Let's go kill them!" - Tyrion