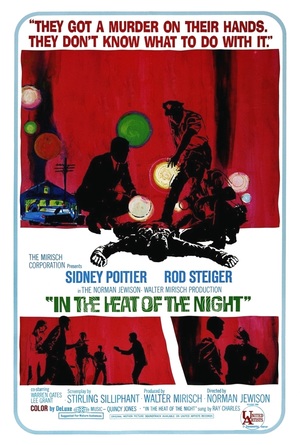 In The Heat of the Night

When a wealthy industrialist is found murdered in a small Mississippi town and an African-American man is picked up at the train station with a wallet full of cash, local Police Chief Bill Gillespie immediately assumes he has caught his culprit. He’s soon embarrassed to learn that the man he has arrested is Detective Virgil Tibbs, an experienced police officer from Philadelphia. The unlikely pair are forced to work together to unravel the mystery, leading them on a line of enquiry that will challenge both of their preconceptions. Directed by Norman Jewison with standout performances from Sidney Poitier, Rod Steiger.

"Tense, funny, and thought-provoking all at once, and lifted by strong performances from Sydney Poitier and Rod Steiger, director Norman Jewison's look at murder and racism in small-town America continues to resonate today." (Rotten Tomatoes)

"This is an uncommonly alive little thriller, knowing just what it wants to do and doing it well." (Sight and Sound)

"It's a pleasure, all too rare, to watch two splendid actors pitted against each other with equal force such as Sidney Poitier and Rod Steiger in the exceptional murder mystery, 'In the Heat of the Night'." (New York Daily News)

IN THE HEAT OF THE NIGHT (Norman Jewison, 1967 / 110 mins / PG) While traveling in the Deep South, Virgil Tibbs, a black Philadelphia homicide detective, becomes unwittingly embroiled in the murder investigation of a prominent businessman when he is first accused of the crime and then asked to solve it. Finding the killer proves to be difficult, however, especially when his efforts are constantly thwarted by the bigoted town sheriff. But neither man can solve this case alone. Putting aside their differences and prejudices, they join forces in a desperate race against time to discover the shocking truth.