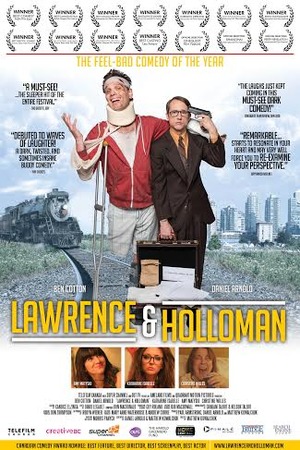 THE FEEL-BAD COMEDY OF THE YEAR …

We encourage you to get your tickets, and invite your friends! If you saw it at the Rio during VIFF, see it again for the very first time :)

Having swept North America with "must-see" reviews and 11 awards in 11 festivals, this darkly twisted buddy comedy – currently nominated for 4 Canadian Comedy Awards -- has now signed with distributor Search Engine Films and is making its theatrical premiere ...

Lawrence is an ever-optimistic suit salesman for whom everything goes right. That is until he meets Holloman, a cynical and suicidal credit collector, and everything starts to go wrong. Very wrong. Is happiness determined by our outlook on life? Or can our destiny be changed … by another.

“A must-see! … the sleeper hit of the entire festival.” – The Gazette, EIFF
"Dark, twisted, and really very funny ... a multi-dimensional screamer. One of the events top flicks." - The Province
“The laughs just kept coming in this must see dark comedy. Perfectly cast … so well written .. audiences are going to love it. Put it on your calendars and get ready for those belly laughs!” – The Cinequest Film Review, San Jose
“Debuted to waves of laughter... a darkly funny, sometimes insane buddy comedy.” – YVR Shoots
“A kind of comic apocalypse ... the unlikeliest best buds in the history of buddy comedy.” – Edmonton Journal
“The writing is witty ... the actors’ comedic timing is fantastic.” – The Examiner, Washington DC
“Clever, witty, and playful … This film is just dark enough that I feel a bit guilty about having enjoyed it as much as I did!” - AlienatedinVancouver
“Enjoyable to anyone … this film will please. It could also inspire you to choose to be optimistic and happy!” - Reellife
“Morbidly hilarious! … and that is sickly awesome.” - JasonWatchesMovies
“BEST BC FILMS AT VIFF” List – Vancouver Magazine
“TOP CANADIAN FILMS TO SEE AT VIFF” – The Huffington Post
“Rich humor … appealing performances … and something remarkable happens: the story starts to resonate in your heart — and when the dust settles this richly dark film may very well force you to re-examine your perspective.” – GayVancouver.net

Distributor John Bain of Search Engine Films is the former Senior VP of Distribution at Lions Gate Films and Maple Pictures, and has overseen the Canadian release of movies such as Drive, Our Idiot Brother, Winter’s Bone, Hurt Locker, The Men Who Stare at Goats, Hunger, and Biutiful.
www.searchenginefilms.com

Search Engine will be releasing Lawrence & Holloman theatrically in at least 3 Canadian cities, starting in the film’s hometown of Vancouver: