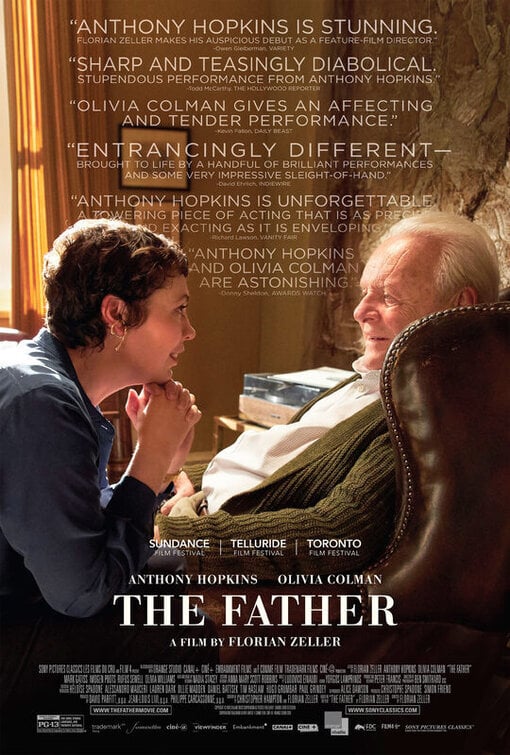 Anthony (Anthony Hopkins) is 80, mischievous, living defiantly alone and rejecting the carers that his daughter, Anne (Olivia Colman, THE FAVOURITE), encouragingly introduces. Yet help is also becoming a necessity for Anne; she can’t make daily visits anymore and Anthony’s grip on reality is unraveling. As we experience the ebb and flow of his memory, how much of his own identity and past can Anthony cling to? How does Anne cope as she grieves the loss of her father, while he still lives and breathes before her?

Drawn from the stage play of the same name, which was written by Florian Zeller and launched in Paris in 2012, winning a Moliere Award for Best Play, before hitting Broadway and London’s West End, where it won both Tony and Olivier Awards. Zeller directed the film adaptation – his feature debut – filmed in London, from a screenplay he co-wrote with Christopher Hampton (ATONEMENT, DANGEROUS LIAISONS). Notably, the film won Oscars for both Hopkins (his second) and Zeller and Hampton (Best Adapted Screenplay).

THE FATHER warmly embraces real life, through loving reflection upon the vibrant human condition; heart-breaking and uncompromisingly poignant — a movie that nestles in the truth of our own lives. With Olivia Williams, Imogen Poots, Rufus Sewell.

“It is a huge artistic triumph to so cleverly illuminate such a common yet often hard to comprehend condition, and amongst the most evocative and insightful depictions of dementia we’ve seen on screen…” (The List)

“‘The Father’ is a polished piece of work but an unsparing one, offering no false assurances.” (TIME Magazine)

THE FATHER (Florian Zeller, 2020 / PG / 97 mins) A man refuses all assistance from his daughter as he ages and, as he tries to make sense of his changing circumstances, he begins to doubt his loved ones, his own mind and even the fabric of his reality.