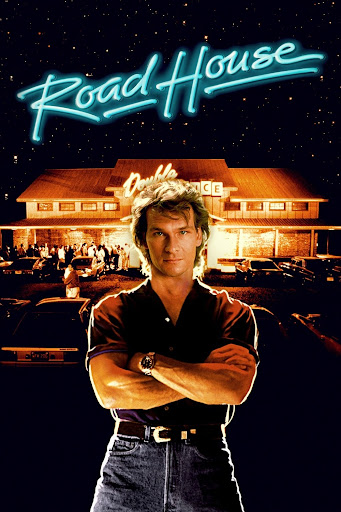 "The dancing's over. Now it gets dirty."

In ROAD HOUSE, our man Swayze stars as Dalton, PhD-educated cooler (aka bouncer) hired to clean up the notorious Double Deuce - the meanest, loudest and rowdiest bar south of the Mason-Dixon Line - but runs afoul of a ruthless crime boss who controls the town. The stage is set for an action-packed showdown! Also starring Kelly Lynch.

ROAD HOUSE (Rowdy Herrington, 1989 / 114 mins / 14A) | The Double Deuce is the meanest, loudest and rowdiest bar south of the Mason-Dixon Line, and Dalton has been hired to clean it up. He might not look like much, but the Ph.D.-educated bouncer proves he's more than capable -- busting the heads of troublemakers and turning the roadhouse into a jumping hot-spot. But Dalton's romance with the gorgeous Dr. Clay puts him on the bad side of cutthroat local big shot Brad Wesley.