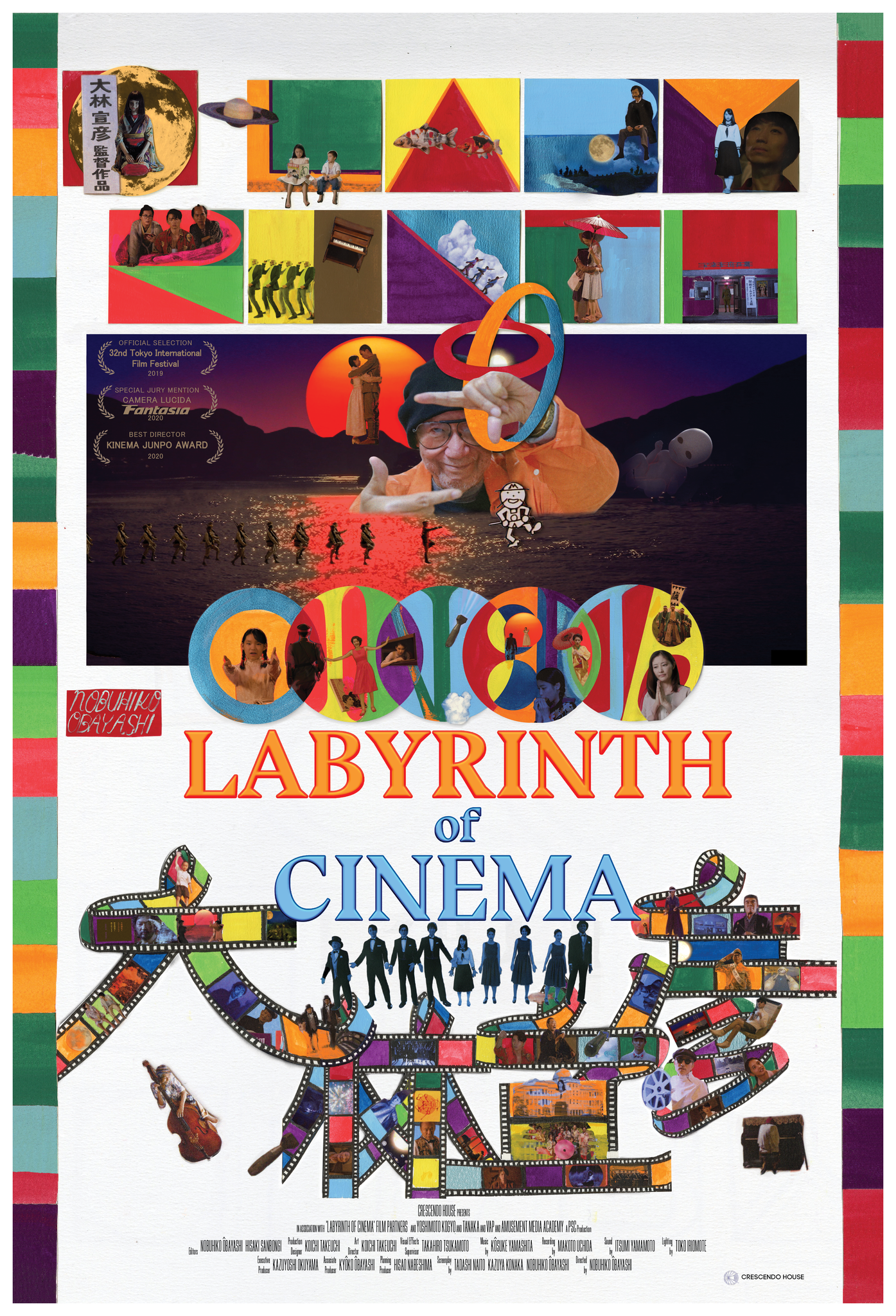 The final film by Nobuhiko Ôbayashi (the prolific cult filmmaker behind the legendary, experimental 1977 offering HAUSU) finds the late director returning to the subject of Japan’s history of warfare following the completion of his “War Trilogy,” which ended with HANAGATAMI.

On the last night of its existence, a small movie theater in Onomichi—the seaside town of Obayashi’s youth where he shot nearly a dozen films—screens an all-night marathon of Japanese war films. When lightning strikes the theater, three young men are transported into the world onscreen where they experience the violent battles of several wars leading up to the bombing of Hiroshima. A breathless cinematic journey through Japan’s past, LABYRINTH OF CINEMA finds Obayashi using every trick in his book to create an awe-inspiring, visually resplendent anti-war epic that urges us to consider cinema as a means to change history. The culmination of an exceptional 60-year career worth celebrating.

Born in Hiroshima in 1938, Nobuhiko Obayashi was a director, screenwriter and editor of films and television advertisements. He began his filmmaking career as a pioneer of Japanese experimental films before transitioning to directing more mainstream media, and his resulting filmography as a director spanned almost 60 years.

He was notable for his distinct surreal filmmaking style, as well as the anti-war themes commonly embedded in his films. He died on 10 April 2020 at the age of 82, from lung cancer in Tokyo.

“Forget a swan song: Nobuhiko Obayashi’s final film is a shriek, a tirade, a lecture and a rollicking action-adventure stuffed into a three-hour pop-art package.” (The New York Times)

"Obayashi Nobuhiko's three-hour swansong is a pop-art paean to pacifism and unity in the form of an exploration of Japanese film history and, in particular, its many depictions of armed conflict." (Sight & Sound)

"'Labyrinth of Cinema' is a true epic, which uses its three-hour runtime as a fully immersive playground of cinematic experiments." (Film Inquiry)

"An epic blitz of pop-culture hyperactivity: baffling, surreal, tragicomic, then simply tragic. At first, it looks as if it is going to be a sentimental lump-in-the-throat elegy to cinema-going’s golden age. But then it takes us to the heart of Japanese darkness: the second world war and the atomic bomb." (The Guardian)

LABYRINTH OF CINEMA (Nobuhiko Ôbayashi, 2019 / 179 mins / 14A / Japanese w/English subtitles) Setouchi Kinema, the only movie theater on the Onomichi seafront, is about to close its doors. Its last night of existence will be an all-night marathon screening of Japanese war films. When lightning strikes the theater, three young men in the audience find themselves thrown back in time into the world inside the screen. The trio are thrust into the Boshin War, the Second Sino-Japanese War, the Battle of Okinawa and then finally Hiroshima on the eve of the atomic bombing. There, they meet the traveling theater troupe "Sakura-tai". But can they alter the course of destiny to save the troupe?