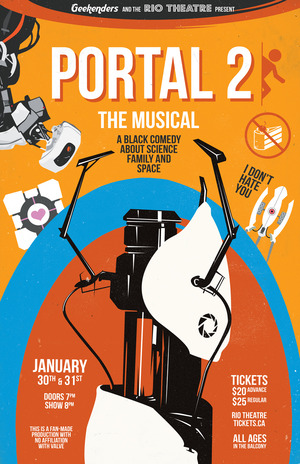 Portal 2: The (Unauthorized) Musical
A Black Comedy about Science, Family, and Space

Tickets:
$20 pre-sale general admission Ticket. $25 at the door.
Get your tickets in advance to guarantee entry!
Tickets on sale at
https://riotheatretickets.ca/

In the distant future, in a far off laboratory standing silent and long abandoned, we meet Chell. She has been asleep for a long time.

When she's awoken by a chatty, British, blue-eyed robot, she finds herself in a facility that is overgrown and falling apart. Together, the two attempt an escape, inadvertently stirring.... something.

Featuring a cast of fourteen of Geekenders' favourite performers, the theatre troupe called a "cult sensation" by Vancity Buzz is pulling out all the stops to ensure a joyful, memorable night for geeks of all types.

SPECIAL THANKS TO THE RIO THEATRE!
http://www.riotheatre.ca/

Here's what the media has had to say about other Geekenders productions:

"With the use of huge puppets, beautiful human x-wings and tie fighters, and explosions of confetti, this was both mind-blowing and epic. I am waiting impatiently for the return of fabulous dancing and singing, more (and better than our) puns, and tons of nostalgia and fandom with a cast that includes sexy appearances from Chewbacca, Darth, Han, R2D2, Luke, and many more, all crafting an impressive two-act adaptation of this classic cinematic masterpiece."
-Living Myth Magazine on Star Wars: A Nude Hope

"Not only did The Wizard of Bras provide a rousing burlesque show, but through the use of innuendo, satire, and social commentary, Geekenders delivered a unique performance that appeals to a range of audiences."
-The Peak

Disclaimer: This is a fan-made production. We are not associated with Valve.