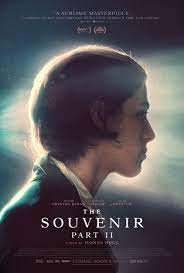 In the aftermath of her tumultuous relationship with a charismatic and manipulative older man, Julie begins to untangle her fraught love for him in making her graduation film, sorting fact from his elaborately constructed fiction.

Filmmaker Joanna Hogg’s shimmering story of first love and a young woman’s formative years, THE SOUVENIR: PART II is a portrait of the artist that transcends the halting particulars of everyday life — a singular, alchemic mix of memoir and fantasy. Reprising their daughter-mother roles (following 2019's THE SOUVENIR) are real-life relatives Honor Swinton Byrne and her mother, Tilda Swinton, who make the most of their family dynamic to glorious effect. Also starring Richard Ayoade (TV's 'The IT Crowd').

"It shouldn’t work, and maybe it shouldn’t even have got made. But it does and it has: and Joanna Hogg has given us an amazingly luminous self-portrait of the film-maker as a young woman: metatextual, confessional and autobiographical. ...The Souvenir is a movie that has defied the laws of film industry gravity, and those big names in the credits don’t in themselves explain this: a film that has floated free of what might be expected commercially or in any other way and carries itself with a marvellous austere artistry and compositional flair. What’s more, the sunbursts of emotion in the musical soundtrack gave me enough vitamin D to last the rest of the year." (Guardian)
"We often applaud such single-mindedness in established filmmakers. This movie makes it abundantly clear what a double-edged sword artistic passion and perseverance can be, and yet how vital." (National Post)

"Writer-director Joanna Hogg's artistic choices formulate something that isn't easily explained and is fathomable only in the viewing of it." (Chicago Reader)
"Hogg captures something I've felt acutely as a female filmmaker: a desperate need for everyone to like you, which eliminates any possibility of their respect." (Globe and Mail)

THE SOUVENIR: PART II (Joanna Hogg, 2021 / 106 mins / 14A) In the aftermath of her tumultuous relationship, Julie begins to untangle her fraught love for him in making her graduation film, sorting fact from his elaborately constructed fiction.