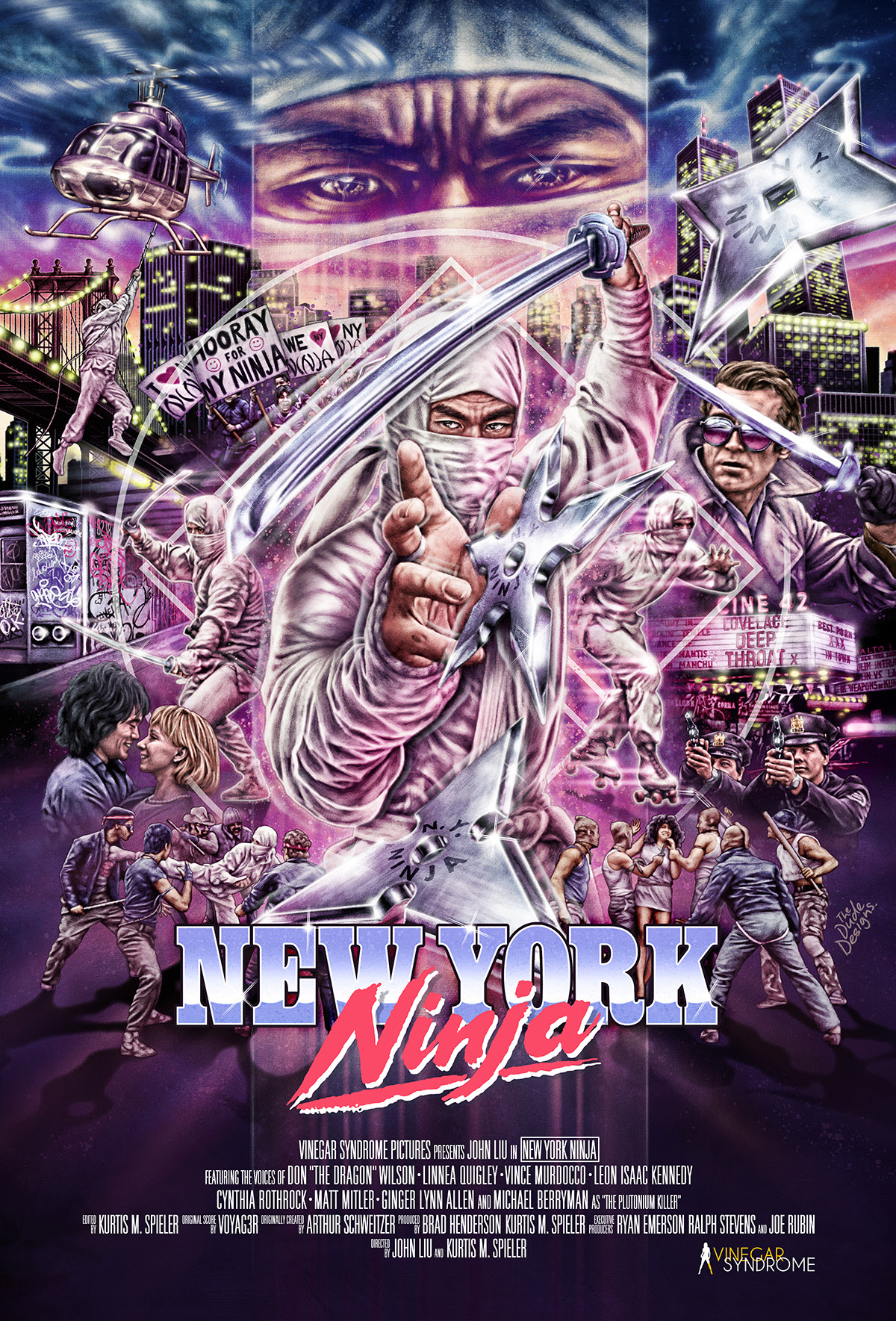 CIRCLE COLLECTIVE and VINEGAR SYNDROME are proud to present... NEW YORK NINJA. Shot entirely on 35mm in 1984, it was abandoned during production - resulting in all original sound materials, scripts and treatments going missing. The rights and unedited original negative were subsequently acquired by Vinegar Syndrome, who have meticulously constructed and completed the film, enlisting the talents of genre film superstars Don "The Dragon" Wilson, Michael Berryman and Cynthia Rothrock to voice the leads. This is truly a one of a kind film experience.

Originally directed by and starring martial arts actor John Liu (THE SECRET RIVALS, INVINCIBLE ARMOR) in his only American production, NEW YORK NINJA was filmed entirely on 35mm in 1984, but the project was abandoned during production resulting in all original sound materials being lost over time. 35 years later, Vinegar Syndrome acquired the original unedited camera negative and painstakingly constructed and completed the film.

Restored in 4K from the original camera elements, NEW YORK NINJA is finally available in all of its ridiculous, over-the-top glory for the first time ever after spending nearly four decades in film obscurity.

John is just an average man working as a sound technician for a New York City news station, until one day his pregnant wife is brutally murdered while witnessing the kidnapping of a young woman in broad daylight. Turning to the police for help, John soon learns that the city is overrun with crime and the police are too busy to help. Dressing as a white ninja, John takes to the streets as a sword wielding vigilante hell bent on cleaning up the streets of the city he once loved by ridding it of muggers, pickpockets, rapists, and gang members. However, in John’s quest for justice, he soon finds himself the target of every criminal in the city, including a mysterious villain known only as the Plutonium Killer. Will John survive to become the hero that New York City so desperately needs?

"Admittedly, the tonal shifts between ninja-centric fun and kidnapping women are rough. However, this does little to diminish the culty, campy enjoyment the picture boasts with zeal." (Film Threat)

"It's a must-see for anyone who loves outrageous old action flicks, and who appreciates the labor of love that is film preservation." (Film Inquiry)

NEW YORK NINJA (Originally directed by John Liu, Re-directed by Kurtis Spieler, 2021 / 92 mins / 18A) Originally shot in 1984 and abandoned before being re-discovered and finished in 2021, NEW YORK NINJA is about a sound technician for a news station who becomes a vigilante ninja in New York City after his pregnant wife is murdered.