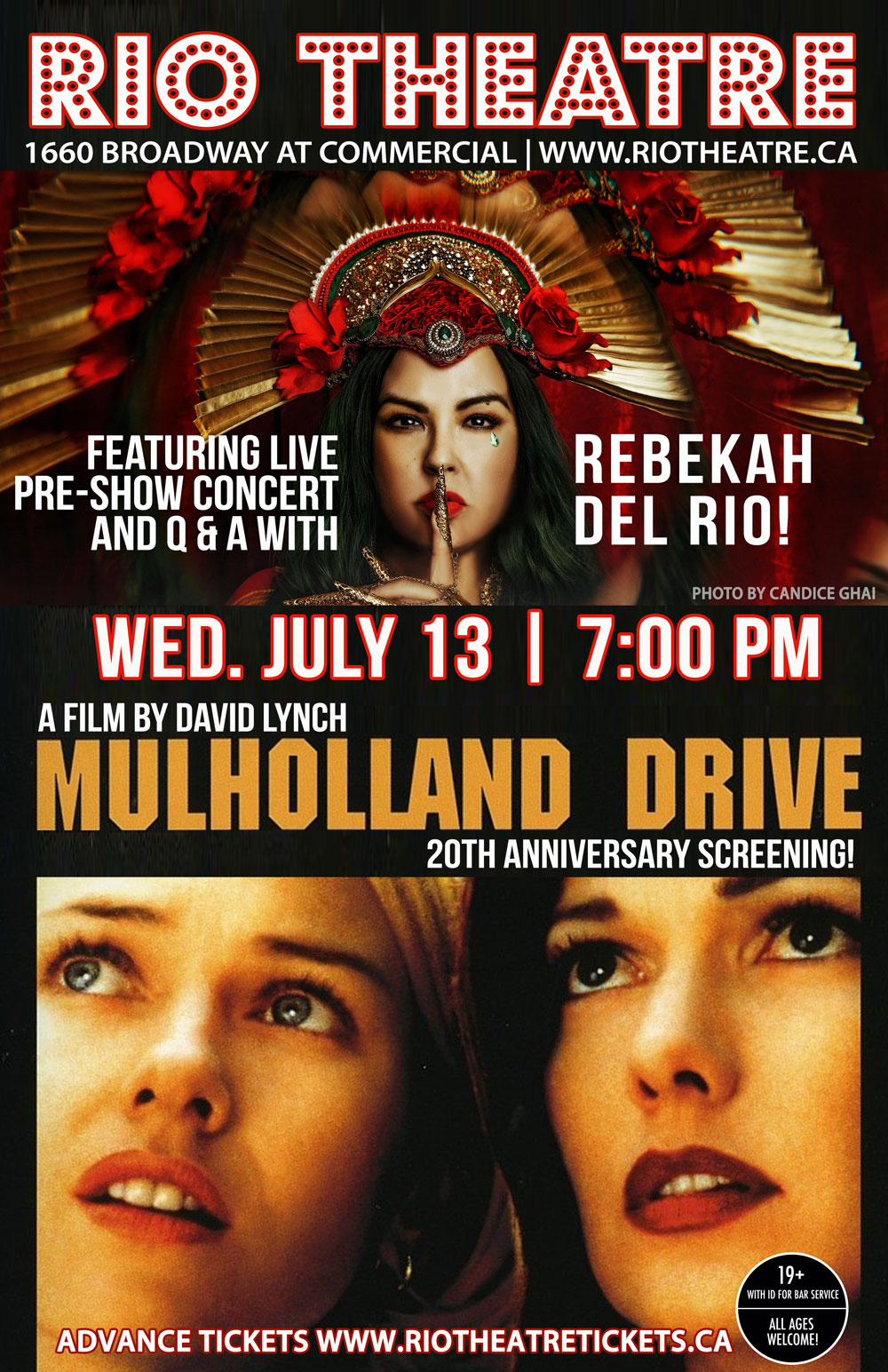 Lynch wrote and directed this story about two women (including Naomi Watts, in her star-making turn) who find themselves walking a fine line between truth and deception in the beautiful but dangerous netherworld of Hollywood.

Singer/songwriter Rebekah Del Rio is well known for her unique style which is perhaps best represented in her signature song, the wrenchingly beautiful ballad “Llorando," a Spanish-language version of Roy Orbison’s “Crying." On the sheer strength of that emotional rendition, Lynch would eventually cast her as herself in his nightmarish hymn to L.A., MULHOLLAND DRIVE; her noteworthy performance garnering universal praise as “a dazzling star turn” and “utterly enthralling." Rebekah's vocal talents can be heard on countless soundtracks and her own catalogue, which includes a song in which she collaborated with Mr. Lynch himself. Ms Del Rio offers an intense and thrilling live experience - guaranteed to take the listener to that other world of dreams.

A dark-haired woman (Laura Elena Harring) is left amnesiac after a car crash. She wanders the streets of Los Angeles in a daze before taking refuge in an apartment. There she is discovered by Betty (Watts), a wholesome Midwestern blonde who has come to the City of Angels seeking fame as an actress. Together, the two attempt to solve the mystery of Rita's true identity. The story is set in a dream-like Los Angeles, spoilt neither by traffic jams nor smog.

"You can discover a lot about yourself by getting lost in Mulholland Drive. It grips you like a dream that won't let go." (Rolling Stone)

"Lynch gets dreams like almost no other filmmaker, because he understands that dreams are not metaphors, but irrationally assembled spaces in which we can’t help but look for symbolism and logic." (AV Club)

*Minors OK. Must be 19+ w/ID for bar service. Sorry, Rio Theatre Groupons and passes n/a for this event.

MULHOLLAND DRIVE (David Lynch, 2001 / 147 mins / 18A) Along Mulholland Drive nothing is what it seems. In the unreal universe of Los Angeles, the city bares its schizophrenic nature, an uneasy blend of innocence and corruption, love and loneliness, beauty and depravity. A woman is left with amnesia following a car accident. An aspiring young actress finds her staying in her aunt's home. The puzzle begins to unfold, propelling us through a mysterious labyrith of sensual experiences until we arrive at the intersection of dreams and nightmares.

*Minors permitted. Must be 19+ w/ ID for bar service. All seating is general admission.
**Sorry, Rio Theatre Groupons and passes n/a for this event.