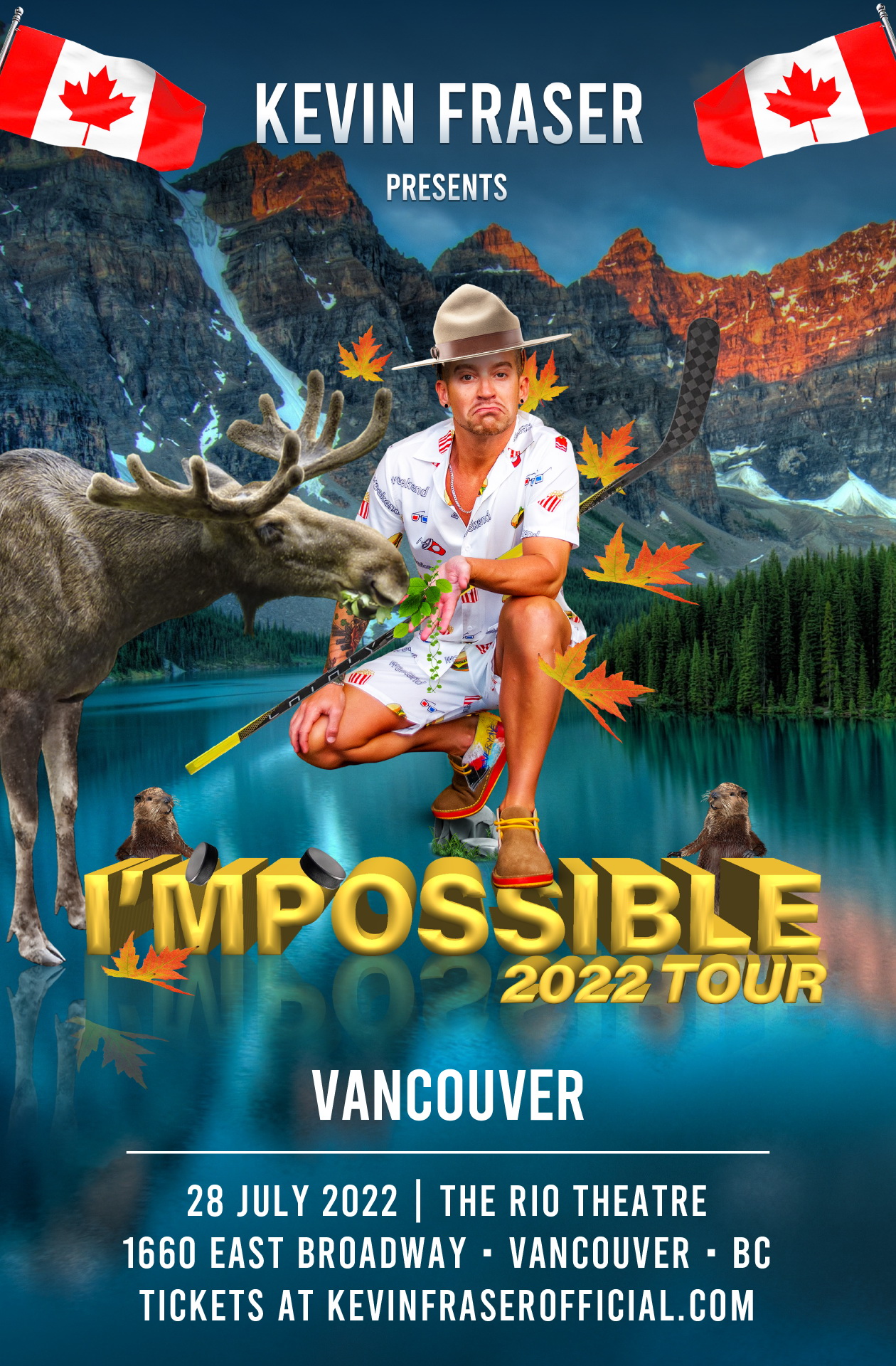 This fall, Vancouver gives a warm welcome to South African comedian Kevin Fraser as he gives a Canadian crunch on stage with his I’MPOSSIBLE Tour.

East Van's Rio Theatre is ready to welcomes all fans and comedy enthusiasts to light up the night with Fraser, and enjoy some high energy humour from his performance.

* Must be 19+ w/ID for bar service. Rio Theatre Groupons and passes n/a for this event.
*All seating is General Admission. If you have any specific seating requirements, you are requested to kindly email info@kevinfraserofficial.com to discuss.
About Kevin Fraser

Kevin Fraser, previously known as Spindoctor, began performing at the age of 16 as a DJ in his hometown of Durban, South Africa. He quickly became known as a quirky, techy DJ who fused sassy house beats with soulful vocals, adding percussive flavour to afrolutionize his sound.

In 2013, by the time he made the career move to Johannesburg, he had built a powerful reputation and eclectic following in the industry. He was known for his versatility and his connection with varied audiences thanks to the high energy he brought to the stage.

Since then, Kevin has entertained over 100 venues and festivals across South Africa, Miami, Australia, the UK, Europe and Indonesia. He has organized some of South Africa’s hottest parties as a key ambassador for entertainment gurus, G&G Productions. It was with them that Kevin performed for dynamic crowds of up to 12,000 people. He shared the stage with the likes of Steve Aoki, Dimitri Vegas & Like Mike, Afrojack and Avicii.

Kevin’s entrepreneurial skill inspired him to develop not just an entertainment brand, but a label that speaks to a niched market of performers and entertainment players alike. He founded Cream Kulture in 2013, coordinating all his own events, developing apparel, and being the ambassador of his own brand.

After his move to Australia in 2014, Kevin’s passion for performance and his natural comedic talent started to evolve into something truly unique. Before long, he realised he could not only make people dance, but laugh a little too. Kevin began releasing videos about his experience as an ex-pat abroad and did so through the guise of stereotypical South African personas. The success of these videos was instantaneous. Kevin’s career took off, and his fan base exploded.

He has since broken the 1 million view mark with one of his more famous South African personas in ”The Melbourne Train Ride” and “Honourable Teletubbies’’. This gift for entertainment has now found him on the stage, performing for thousands of fans across the globe. Kevin brings a unique fusion of music and comedy to the stage and delivers truly inimitable performances.

With volumes of international live shows under his belt, he has entertained over 50 cities in 2018 with his “Club Can’t Handle Me” show. As anticipated, Kevin Fraser will burst into 2019 with his eagerly awaited show, “Leaving The World Behind”.

* Must be 19+ w/ID for bar service. Rio Theatre Groupons and passes n/a for this event.
*All seating is General Admission. If you have any specific seating requirements, you are requested to kindly email info@kevinfraserofficial.com to discuss.
About Kevin Fraser