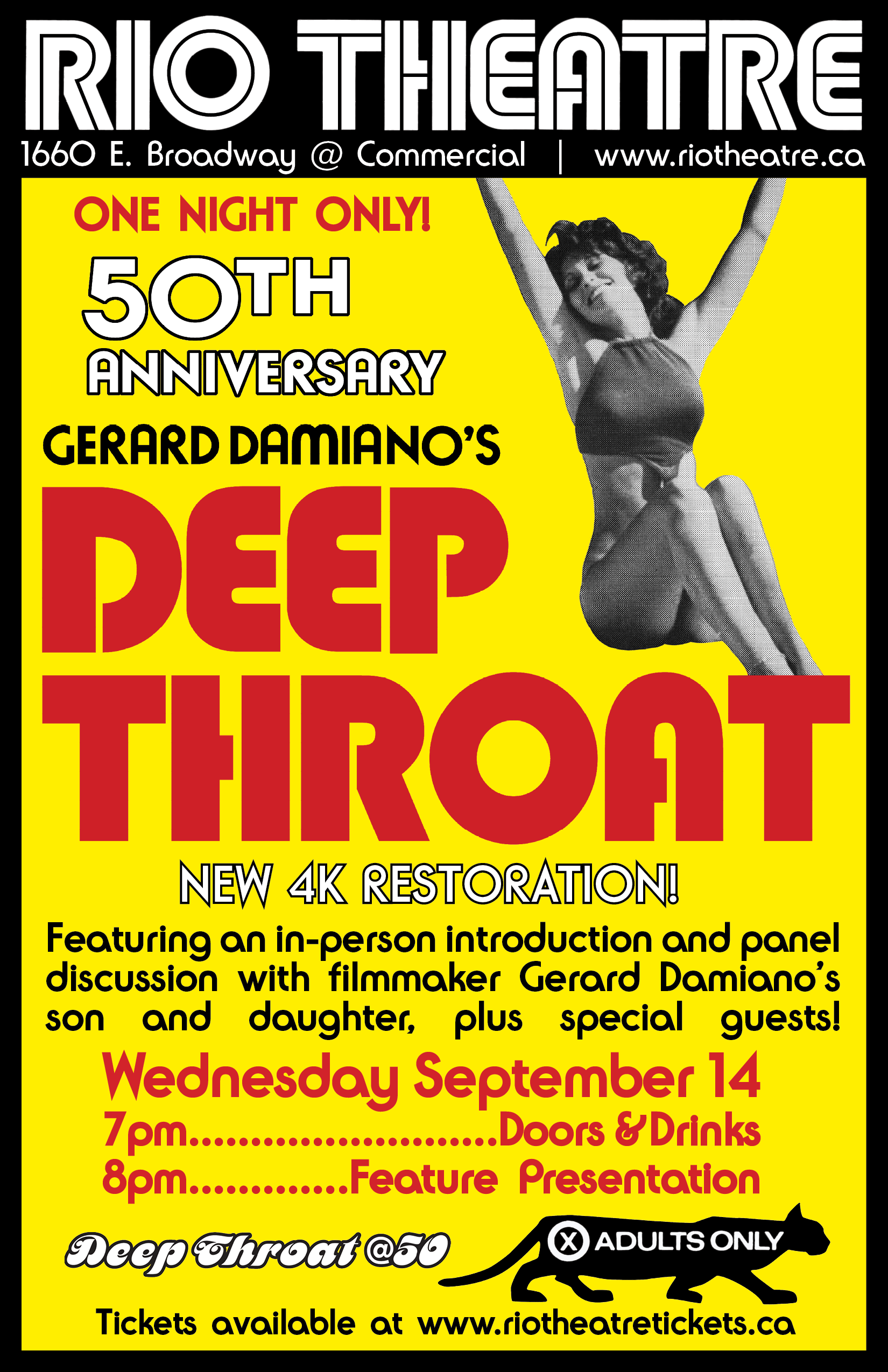 "It makes me feel tingly all over and then nothing... There should be bells ringing, dams busting, bombs going off!"

Join us at the Rio Theatre on Wednesday, September 14 for a special 50th Anniversary screening and talk-back event in celebration of one of the most iconic adult films ever put to celluloid, Gerard Damiano's DEEP THROAT.

Joining us for the Rio Theatre's event will be the filmmaker's son and daughter, Gerard Jr. and Christar, to introduce the film, provide important and personal context to its complicated legacy, and participate in the talk-back conversation. Other featured panelists scheduled to participate include Vancouver sex work activists and advocates Susan Davis and Velvet Steele and Dr. Thomas Waugh, Professor Emeritus in the programs in Film Studies, Sexuality & Queer Studies at Concordia University.

Partial proceeds from this event are being directed to Vancouver's WISH society. https://wish-vancouver.net/media/

This light, campy, comedy was one of the first full length feature films to include hard-core sex. Upon its release, it became an instant phenomenon, breaking box office records in its first week. Made for a mere $25,000, it was reported to have made over $600,000,000 - ans is still considered to be the most profitable films of all time. Busted by police, picketed, and banned, the ongoing persecution only added to  the film’s popularity, signifying a major audience shift in the consumption of mainstream media at the time. Celebrities of the era, including Warren Beatty, Shirley MacLaine, Jack Nicholson and eve Jacqueline Onassis, as well dignitaries, couples,  and women joined the usual “raincoat crowd,” waiting in lines that wrapped around the block just to see it.

DEEP THROAT (Gerard Damiano, Sr. / 1972 / 62 mins / Adults Only) Unsatisfied and unfulfilled, a young woman (Linda Lovelace), derives little pleasure from sex. She feels a lot of “little tingles”, but wants “Bells Ringing! Dams Bursting! and Bombs going off!” Her roommate (Dolly Sharp) sends her to an unconventional therapist (Harry Reems), who discovers the root of her problem. Her clitoris is deep down in her throat! The solution: a technique known as“Deep Throat.”Once cured, she devotes herself to helping others to find the sexual satisfaction that she so desired.