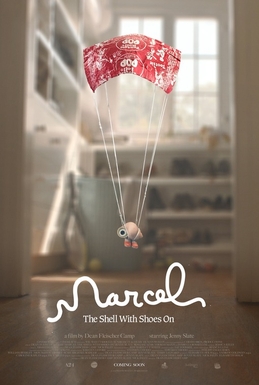 Marcel the Shell with Shoes On

Marcel is an adorable one-inch-tall shell who ekes out a colorful existence with his grandmother Connie and their pet lint, Alan. Once part of a sprawling community of shells, they now live alone as the sole survivors of a mysterious tragedy. But when a documentary filmmaker discovers them amongst the clutter of his Airbnb, the short film he posts online brings Marcel millions of passionate fans, as well as unprecedented dangers and a new hope at finding his long-lost family. A beloved character gets his big-screen debut in this hilarious and heartwarming story about finding connection in the smallest corners. With Jenny Slate, Isabella Rossellini, Thomas Mann, Rosa Salazar, Leslie Stahl.

"Marcel" is a wisp of a wistful film, whether it’s being existentially deep or essentially silly. Most of all, it just feels like a salve." (Rolling Stone)

"Poignant, profound, and utterly heartwarming, Marcel the Shell with Shoes On is animated entertainment with real heart." (Rotten Tomatoes)

"Hilarious and extremely sweet... a feel-good movie that’s not like anything you’ve seen before." (VOX)

"It's the quiet and contemplative moments - where not much really happens but the possibilities seem endless - that stick with you." (NOW Toronto)

MARCEL THE SHELL WITH SHOES ON (Dean Fleischer-Cap, 2022 / 89 mins / PG) Marcel, a 1-inch-tall shell, lives with his grandmother, Connie, the only residents of their town after their neighbors' sudden, mysterious disappearance. When discovered by a guest amongst the clutter of his Airbnb, the short film he posts online brings Marcel millions of passionate fans and a new hope of reuniting with his long-lost family.