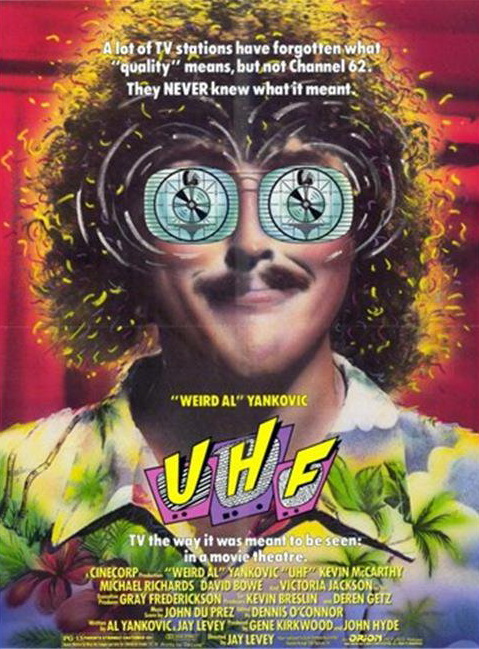 Given the enormous popularity of the recent Weird Al biopic WEIRD: THE AL YANKOVIC STORY (starring Daniel Radcliffe as the accordion playing, musical comedy genius), we thought the time was right to get a little weird ourselves on Wednesday, November 30. Yes, that’s right: We’re getting ready to spin the Wheel of Fish and heading over to Spatula City so that we can take a look back at one of the greatest cult-comedy masterpieces that came out of the 80s… UHF!

(But please, leave your mop at home for this one…)

After losing yet another job, George (Weird Al Yankovic) wonders if there is any career that can handle his outrageous personality. When George’s uncle (Stanley Brock) hands him the deed to a local TV station, George creates a series of television shows based on social satire and hyperactive humor, with the help of his best friend, Bob (David Bowe). However, a rival station’s bitter CEO (Kevin McCarthy) tries to destroy George’s wacky programming, forcing him to fight back. Starring Victoria Jackson, Fran Drescher, Michael Richards.

UHF (Jay Levey, 1989 / 14A / 97 mins) “Weird” Al Yankovic plays George Newman, a daydreaming ‘normal guy’ who finds himself the owner of a public TV station. George’s wacky imagination gets put to good use, and the station becomes becomes a hit with its roster of bizarre shows and colourful characters.