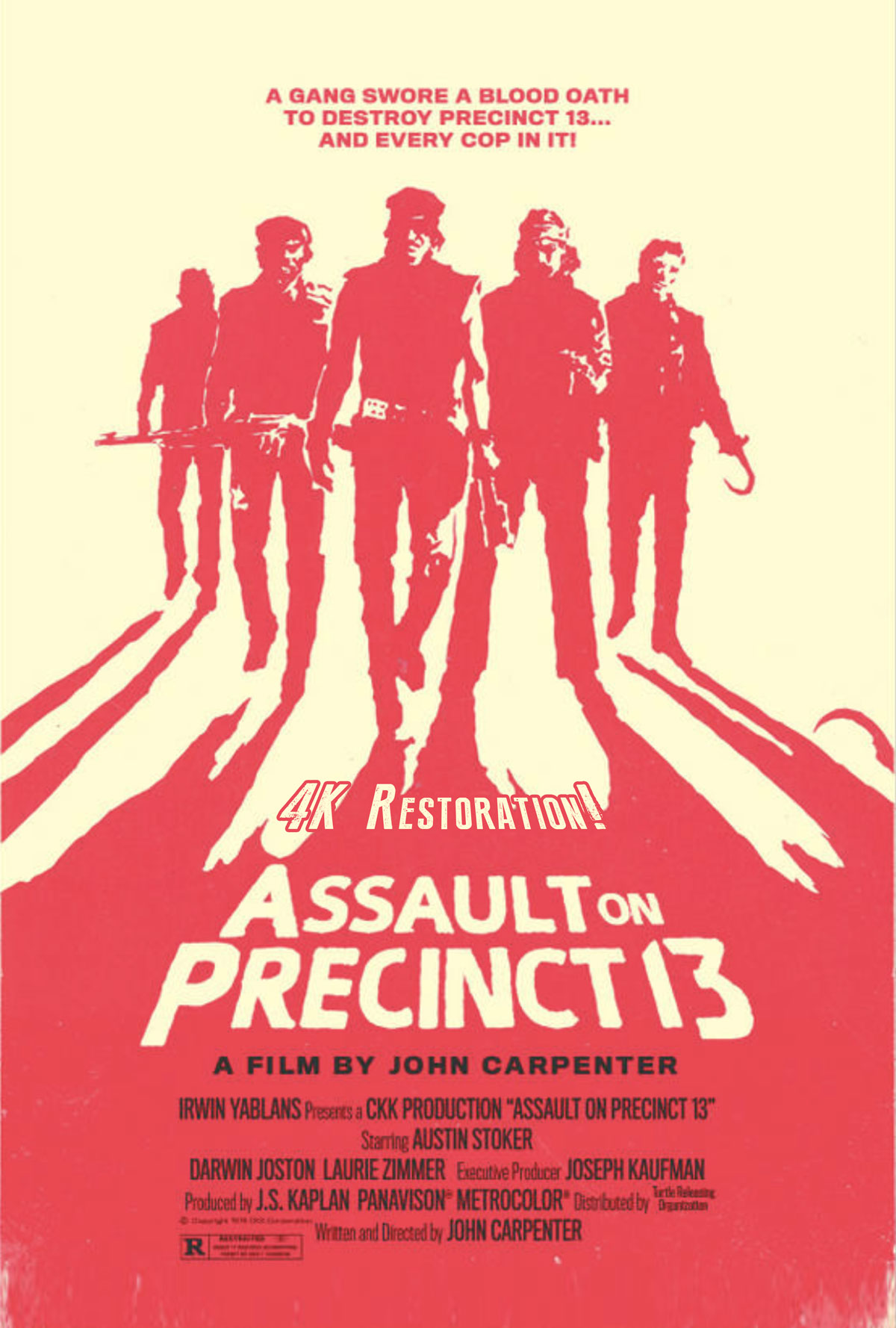 Considered by many to be one of the greatest and most underrated action films of the 1970s, John Carpenter's gritty action thriller ASSAULT ON PRECINCT 13 (which he wrote, directed, scored and edited) has been given a new 4K restoration in 2023 from the original camera negative courtesy of Deaf Crocodile Films and presented by AGFA.

Released in 1976, Carpenter's stark, modern homage to Howard Hawk’s RIO BRAVO updates the action with a youth gang attacking a closing police station in a blighted ghetto neighborhood. Rapid-fire banter flies fast and furious between a charismatic convict and a policewoman as the faceless, virtually supernatural marauders attack. ASSAULT ON PRECINCT 13 remains one of Carpenter’s most effective pictures, an edge-of-your-seat thriller that put him on the map as an imaginative, creative force to be reckoned with.

When the LAPD kills several members of the South Central gang Street Thunder, the remaining members avenge themselves by way of a bloody war waged against cops and citizens alike. Caught in the crossfire is Lt. Ethan Bishop, who's managing a skeleton crew at the local and soon-to-be-closed police precinct. As the gang members close in, Bishop forms an unlikely alliance with a group of prisoners in order to defend the station and the lives of everyone in it. With Austin Stoker, Darwin Joston, Laurie Zimmer.

"Almost all of John Carpenter's movies are owned by large entertainment conglomerates. One exception is ASSAULT ON PRECINCT 13, which is owned by people who made it. As executive producer of the film, I am excited to work with Deaf Crocodile on a 4K scan of the original camera negative, and the possibility of applying new technology, including HDR10 and Dolby Vision, to extract much more from the negative image than has been possible before, while still respecting the movie's original roots.” (Joseph Kaufman, Executive Producer)

"A joy to behold: a taut, aesthetic blast of violence." (Empire Magazine)

"Mr. Carpenter is an extremely resourceful director whose ability to construct films entirely out of action and movement suggests that he may one day be a director to rank with Don Siegel." (NY Times)

ASSAULT ON PRECINCT 13 (John Carpenter, 1976 / 91 mins / 18A) A Highway Patrol Officer, two criminals and a station secretary defend a defunct Los Angeles precinct office against a siege by a bloodthirsty street gang.