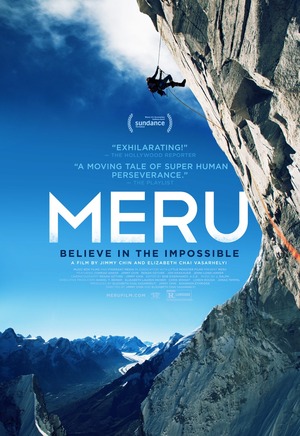 “The best climbing movie of the year.” – Outside MagazineWinner of the prestigious Audience Award (Documentary) at this year’s Sundance Film Festival, MERU perfectly balances its tense, nailbiting narrative with some of most impressive climbing footage ever captured; all set against the breathtaking backdrop of the Himalayan Mount Meru.

*All ages OK in the balcony! 19+ w/ID for bar service.
**Groupons and passes OK! Please redeem at the door.

MERU (Elizabeth Chai Vasarhelyi & Jimmy Chin, 2015 / 87 mins / PG) | Three elite climbers struggle to find their way through obsession and lossas they attempt to climb Mount Meru, one of the most coveted prizes in the high stakes game of Himalayan big wall climbing.

In the high-stakes pursuit of big-wall climbing, the Shark’s Fin on Mount Meru may be the ultimate prize. Sitting 21,000 feet above the sacred Ganges River in Northern India, the mountain’s perversely stacked obstacles make it both a nightmare and an irresistible calling for some of the world’s toughest climbers.