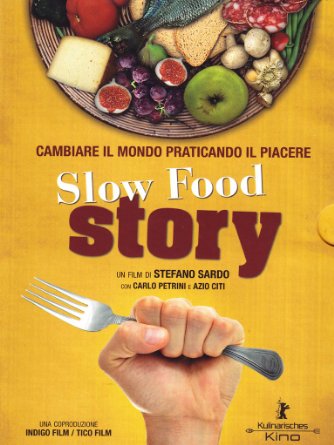 **Online sales end at 4:30pm on the day of the event but tickets will be sold at the door

The Rio Theatre is pleased to present another night featuring a truly fine pairing: Wine + Film! As part of Italian Heritage Month in Vancouver, we're highlighting several films of Italian origin including director Stefano Sardo's acclaimed documentary SLOW FOOD STORY, which is based on the best-selling book (not to mention cultural movement) of the same name.

"In 1986, Carlo Petrini founded the ArciGola Gastronomic Association in Italy and three years later in Paris, launched Slow Food, an international anti-fast-food resistance movement. An ebullient presence, CarlÃ¬n, as he is affectionately known around the globe, has become an ambassador for thinking about food differently. From the tiny town of Bra, home to some 27,000 inhabitants, the Slow Food movement has grown to become a revolution, that now has roots in more than 150 countries. Cheese-makers, vintners, and artisanal food folk, toast Slow Food for bringing about a change in consciousness that shook the very foundation of gastronomy. "

Special thanks to our wine and spirit vendors as well as Il Centro Italian Cultural Centre and Italian Day for their support in this screening.

*Must be 19+ w/ID for entry.
**Sorry, Groupons and passes are not accepted for this event.