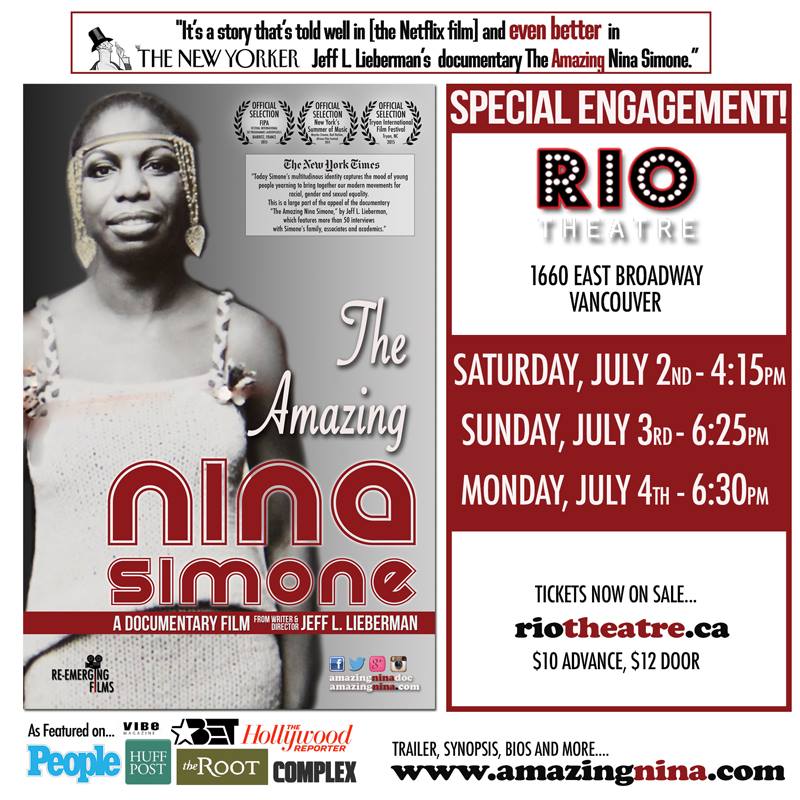 She was left out of Civil Rights history, erased by jazz critics, and forgotten by most Americans because no one knew how to categorize her greatness. But throughout the 1960s, Nina Simone was both loved and feared for her outspoken vision of Black Freedom. Her musical proclamations like Mississippi Goddam, and her iconic style gave voice to people of all colors facing oppression, and continues to empower today with its unrelenting appeal for justice.

Nina Simone is often mis-remembered for her fiery temper, scolding of audiences and her subsequent abrupt departure from the United States. THE AMAZING NINA SIMONE reveals the real Nina Simone through over 50 intimate interviews with those who best knew the artistry and intentions of one America’s true musical geniuses, offering new insights into her journey from classical music and the segregated American South. Nina’s legacy is chartered through her early disappointments, her education among Harlem’s intelligentsia, the creation of over 30 albums, navigating the many factions of the Civil Rights Movement, proclaiming her own unique identity through her style, fashion, and sexuality, and the battle with the untreated illness that consumed both her and her actions, following her journey all the way to the South of France and the place where she finally found freedom.

Through Nina’s friends, family, band members, lovers and fellow activists, we learn the true Nina, and the inspiration behind the songs that for 60 years have moved people to both tears and elation. Music that is pure and untouched by today’s electronics, and touches emotions of love, joy, despair, rage, and revenge – often reflecting the turbulent twists of the 1960s. President Barak Obama listed “Sinnerman” in his top 5 favorite songs, and whether re-mixed, re-sampled or in its pure form, Nina’s music can be heard in films, commercials, radio, and online throughout the world.

The film traces Nina’s roots from her upbringing in segregated North Carolina, when she was once Eunice Waymon, playing piano with a White piano teacher, her beloved Mrs. Mazzy. Destined to be a great Classical Pianist, Eunice’s journey is carefully documented as she experiences early disappointments navigating the Classical Music establishment, landing in an Atlantic City bar, where she develops her unique signature mix of layering folk, gospel, classical, pop and African music. Forced to sing or lose the job, she conceals from her religious mother that she is performing in a bar, and Nina Simone – a star – is born.

The film showcases Nina through her most influential period in the 1960s, but also the journey after the Civil Rights movement fades from the headlines. With the assassinations of friends and leaders, we chart Nina’s journey as she departs the United States, traveling through the Caribbean, Africa, and Europe, chased by an untreated illness that consumes both her and her actions. With the help of friends and fans, Nina eventually re-builds her career to perform again for a generation of fans eager to rekindle the optimism and love she once provided in the 1960s.

With this film, we get one step closer to understanding the woman who has given fans moments of pride, and opportunities to cry in solitude. We gain a deeper appreciation of Nina’s music, and an understanding of the events leading to their creation. We continue her fight for freedom for all people, and introduce younger audiences to the songs that inspired us. We help preserve and understand THE AMAZING NINA SIMONE.

*Groupons and passes OK! Please redeem at the door.
**Must be 19+ w/ID for entry and bar service.

THE AMAZING NINA SIMONE (Jeff Lieberman, 2015 / 110 mins) With musical proclamations like Mississippi Goddam and an iconic style, Nina Simone was both loved and feared throughout the 1960s for her outspoken vision of Black Freedom. Today, Nina is more popular eleven years after her death than ever before. President Barack Obama listed 'Sinnerman' in his top 5 favorite songs, and whether re-mixed, re-sampled or in its pure form, Nina’s music continues to empower people around the world with its unrelenting appeal for justice. With new insights into her musical journey from Classical Music and the segregated South, the worlds of Jazz and Civil Rights, through her erratic behavior and self-exile, Nina’s legacy is chartered all the way to the place where she found freedom.