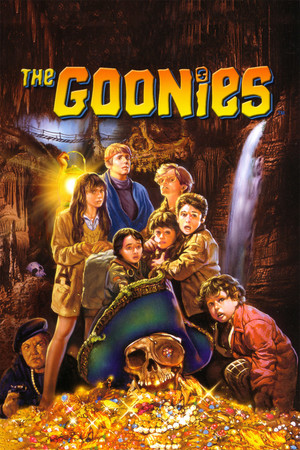 Join us at the Rio Theatre for a Friday Late Night Movie screening of what is â€“ hands down â€“ one of the all time most-requested titles we get, director Richard Donnerâ€˜s THE GOONIES. Written by Chris Columbus from a story by the filmâ€™s producer Steven Spielberg, this beloved 80s childhood classic follows a group of kids from Astoria, Washington (including Sean Astin, Josh Brolin, Corey Feldman and Martha Plimpton), who embark on a treasure-hunting journey after finding a mysterious map pointing them towards the long lost, legendary pirate booty of a certain One-Eyed Willy. Can the kids find the rich stuff, avoid Willyâ€™s booby traps, outrun the Fratellis, make it home all in one piece and save their neighborhood from being turned into a golf course? Well, they can try. After all, â€œGoonies never say die!â€

â€œTHE GOONIES is a smooth mixture of the usual ingredients from Steven Spielberg action movies, made special because of the high-energy performances of the kids who have the adventures.â€ (Roger Ebert)

Tickets $8 advance HERE | $10 at the door
*All ages OK in the balcony! Must be 19+ w/ID for bar service.
**Groupons and passes OK! Please redeem at the door.

THE GOONIES (Richard Donner, 1985 / 114 mins) A young teenager named Mikey Walsh finds an old treasure map in his fatherâ€™s attic. Hoping to save their homes from demolition, Mikey and his friends Data Wang, Chunk Cohen, and Mouth Devereaux run off on a big quest to find the secret stash of Pirate One-Eyed Willie.