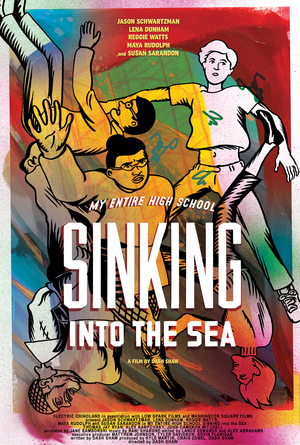 My Entire High School Sinking Into the Sea

The Rio Theatre is very pleased to partner with JFL Northwest for a very special, one night only engagement of graphic novelist Dash Shaw's upcoming animated feature MY ENTIRE HIGH SCHOOL SINKING INTO THE SEA.

From acclaimed graphic novelist Dash Shaw (New School) comes an audacious debut that is equal parts disaster cinema, high school comedy and blockbuster satire, told through a dream-like mixed media animation style that incorporates drawings, paintings and collage. Dash (Jason Schwartzman) and his best friend Assaf (Reggie Watts) are preparing for another year at Tides High School muckraking on behalf of their widely-distributed but little-read school newspaper, edited by their friend Verti (Maya Rudolph). But just when a blossoming relationship between Assaf and Verti threatens to destroy the boys’ friendship, Dash learns of the administration’s cover-up that puts all the students in danger. As disaster erupts and the friends race to escape through the roof of the school, they are joined by a popular know-it- all (Lena Dunham) and a lunch lady (Susan Sarandon) who is much more than meets the eye. But even as the film piles on brilliant details like a post-apocalyptic cult formed by jocks, video game homages, and an infectious synth soundtrack, it never loses sight of the characters at the heart of the story. Hailed as “the most original animated film of the year” and “John Hughes for the Adult Swim generation” (Indiewire), the film’s everyday concerns of friendships, cliques and young love remind us how the high school experience continues to shape who we become, even in the most unusual of circumstances.

*Must be 19+ w/ID for entry and bar service.
**Sorry, no Groupons or passes accepted for this event.

MY ENTIRE HIGH SCHOOL SINKING INTO THE SEA (Dash Shaw, 77 mins / 2017)Best friends Dash and Assaf are sophomores at Tides High, where they author the entire school newspaper. When their editor starts offering Assaf solo assignments, Dash's jealousy prompts him to publish a fictitious story about Assaf having erectile dysfunction. Later, while rummaging through the school archives, Dash discovers records indicating that the building isn't up to code. He tries to warn his schoolmates, but after his slanderous attacks on Assaf, nobody believes him. Then it happens: an earthquake sends the school toppling into the Pacific...