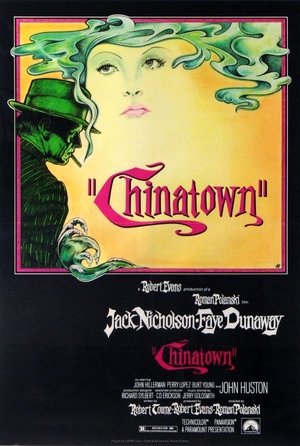 On Saturday, May 13 we're celebrating the one and only Jack Nicholson with a Jack Off! Double Feature highlighting two memorable - not to mention very different - turns from one of cinema's most celebrated actors. Join us at 7:00 pm for CHINATOWN, then stick around and dance with the devil in the pale moonlight for BATMAN (1989) at 9:45 pm. See one, or see 'em both!

In Roman Polanski's neo-noir drama CHINATOWN, Jack Nicholson stars (alongside Faye Dunaway and John Huston) as Private eye Jake Gittes, who lives off the murky moral climate of sunb-aked, pre-World War II Los Angeles. When he's hired by a beautiful socialite (Dunaway) to investigate her husband's extra-marital affair, Gittes is swept into a maelstrom of double dealings and deadly deceits, uncovering a web of personal and political scandals that come crashing together.

"This film is flawless." (Observer)

*Minors welcome in the balcony! (Please note that CHINATOWN is rated 18A.) Must be 19+ for bar service and main floor seating.
**Groupons and passes OK for any single film! Please redeem at the door.

CHINATOWN (Roman Polanksi, 1974 / 130 mins / 18A) A private detective, Jake Gittes, hired to investigate an adultery case, stumbles on the plot of a murder involving incest and the privatization of water through state and municipal corruption, land use and real estate. If he doesn't drop the case at once he faces threats of legal action, but he pursues it anyway, slowly uncovering a vast conspiracy.