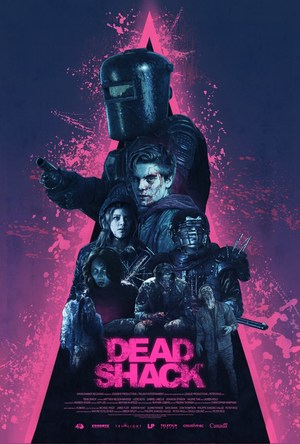 On a weekend getaway at a rundown cabin in the woods, Jason, a cautious teen, his crude best friend Colin and his fearless older sister Summer are forced to work together, grow up and save their hard-partying parents from their predatory neighbor intent on feeding them all to her undead family.

"Boasting an axe-wielding drunk dad, homemade weapons, gouts of gore and a steady stream of zingers, DEAD SHACK is rural Canadian mix of DEAD ALIVE, SCOUTS GUIDE TO THE ZOMBIE APOCALYPSE and '80s kids' movies, with a few nods to HOBO WITH A SHOTGUN and THE WALKING DEAD tossed in for good measure. Co-writer/director Peter Ricq (creator of the animated series FREAKTOWN) keeps things fast, light and full of fight. Holly is particularly fun to watch as she does whatever it takes to put food on the table... er, floor. Dead, alive – teenagers sure are a handful." (Fantasia Film Festival)

"A genre film that knows how to have fun while splattering a few heads in the process? You have my attention." (Slash Film)

"DEAD SHACK arrives as one of the Vancouver International Film Festival’s best surprises, a self-aware horror-comedy that smuggles its modern sensibility into a lovingly retro splatter flick, like SUPERBAD smashing into an EVIL DEAD universe." (The Georgia Straight)

*Must be 19+ w/ID for bar service and main floor seating. Minors OK in the balcony.
**Groupons and passes OK! Please redeem at the door.

DEAD SHACK (Peter Ricq, 2017 / 85 mins / 18A) On a weekend getaway at a rundown cottage in the woods, a 14-year-old teen, his best friend, and his best friend's older sister must work together to save their hard-partying parents from their predatory person in the cabin next to them.