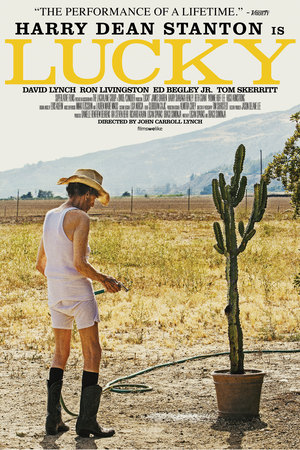 Best known as a character actor, John Carroll Lynch (FARGO, SHUTTER ISLAND, GRAN TORINO) makes a very comfortable move into the director's chair with his debut feature LUCKY, a film that will forever be remembered as a fittingly poignant swan song for its tour de force performance from another beloved character actor, the late, great, Harry Dean Stanton. The nonagenarian shines in this role as 90-year-old atheist who has outlived and out-smoked his contemporaries; as he comes to terms with his own mortality, he searches for ever-elusive enlightenment among the quirky characters that inhabit his off-the-map desert town. At the precipice of his life, he is thrust into a fascinating and memorable journey of self-exploration while contemplating loneliness, morality, spirituality and human connection. With Tom Skerritt, Ron Livingston, Ed Begley Jr., and David Lynch.

"It’s a remarkable gift to fans and cinephiles that LUCKY serves as a first-rate showcase for its star [Harry Dean Stanton] as well as an ideal swan song. The man couldn’t have gone out any better." (Entertainment Weekly)

*Rio Theatre Groupons and passes welcome! Please redeem at the door.
**Must be 19+ w/ID for bar service and main floor seating. Minors welcome in the balcony.

LUCKY (John Carroll Lynch, 2017 / 88 mins / PG) LUCKY follows the spiritual journey of a 90-year-old atheist and the quirky characters that inhabit his off the map desert town.