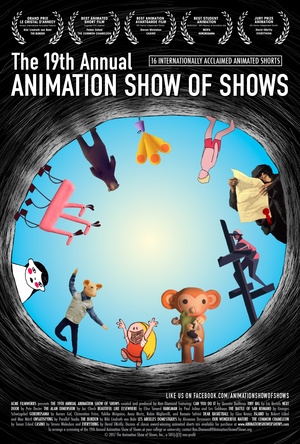 For the third straight year, The Rio Theatre is excited to welcome the return of one of our favourite annual movie events - the 19th edition of Ron Diamond's wonderfully curated ANIMATION SHOW OF SHOWS, an eclectic mix featuring 16 exceptional and inspiring animated shorts from around the world. At a time of increasing social instability and global anxiety about a range of issues, the works in this year’s show have a special resonance, presenting compelling ideas about our place in society, and how we fit into the world.

For more information on the ANIMATION SHOW OF SHOWS, including details on all of this year's filmmakers and their films, go HERE.

Tickets $10 advance | $12 at the door
*Minors welcome in the balcony! Must be 19+ w/ID for bar service and main floor seating.

These films include Niki Lindroth von Bahr’s Annecy Grand Prix-winning “The Burden,” a melancholy, funny and moving film that explores the tribulations, hopes and dreams of a group of night-shift employees, uniquely capturing the zeitgeist of our time. At the other end of the spectrum, David OReilly’s playful and profound “Everything,” based on the work of the late philosopher Alan Watts, explores the interconnectedness of the universe and the multiplicity of perspectives that underlie reality.

Perhaps the most relevant film in the show is a 50-year-old short that was restored by The ANIMATION SHOW OF SHOWS with grants from ASIFA-Hollywood and The National Film Preservation Foundation. “Hangman,” by Paul Julian and Les Goldman, and based on a poem by Maurice Ogden, explores themes of injustice and personal responsibility in its tale of a town whose residents, afraid to speak up, are methodically executed by the title character.

Other program highlights include “Dear Basketball,” Disney veteran Glen Keane’s animation of a poem by Los Angeles Lakers superstar Kobe Bryant, written on the occasion of his imminent retirement; Academy Award-winning Pixar director Pete Docter’s 1990 CalArts student film “Next Door”; and “Casino,” the latest film from director Steven Woloshen, who, for some 30 years, has been creating award-winning experimental films by drawing directly on film stock.