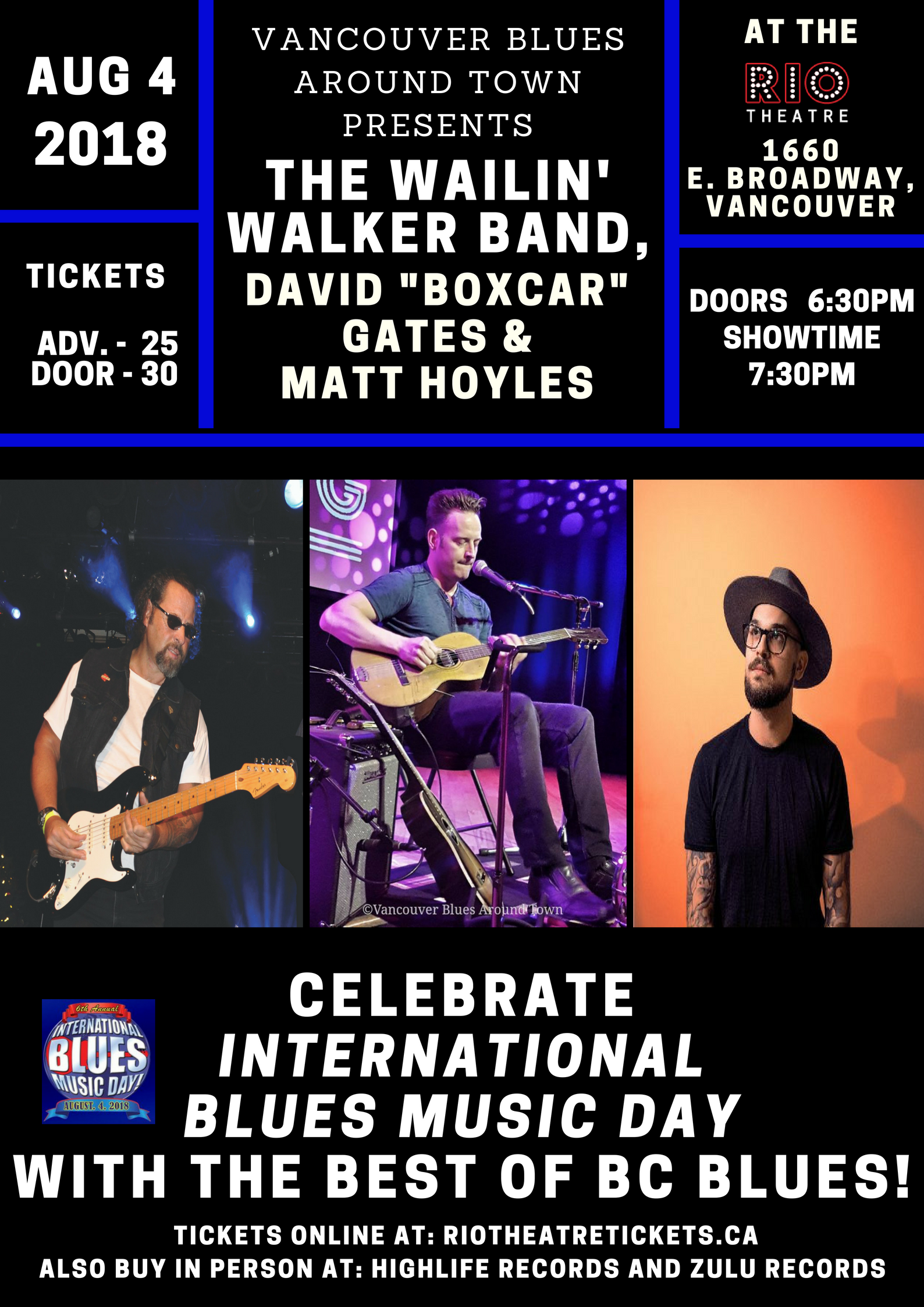 On August 4, 2018, International Blues Music Day, Vancouver Blues Around Town cordially invites you to “Celebrate the Blues” with us. International Blues Day celebrates, promotes, and preserves the rich legacy, tradition and future of the great American form and international language known as blues music.

Join us at the International Blues Music Day Concert!

* This event is 19 and over. Any Ticket holder unable to present valid identification indicating that they are at least 19 years of age will not be admitted to this event, and will not be eligible for a refund.
**Rio Theatre Group-ons and Passes NOT accepted at this event.

Headlining will be the Wailin’ Walker Band.

Al “Wailin” Walker was born and raised in Vancouver, Canada and is well known for his infectious brand of Rockin’ Rhythm and Blues. His stunning electric guitar solos and commanding vocals have been thrilling large crowds for more than 4 decades.

Walker has played with and been personally mentored by many great artists such as Buddy Guy, John Lee Hooker, Pee Wee Crayton and Otis Rush .

As leader, guitarist and singer of the Wailin Walker Band, Walker has shared the stage with Johnny Winter, George Thorogood and Stevie Ray Vaughan to name a few. He continues to work with a tight rhythm section... that keeps dance floors packed....
------
Joining us also in the celebrations is, David “Boxcar” Gates.

David hails from Vancouver, BC, and is heavily influenced by Forefathers of the genre like Mississippi John Hurt, Big Bill Broonzy and Mississippi Fred McDowell. David has evolved into one of Canada’s most renowned acoustic Piedmont, Ragtime & Delta Blues Guitar players.

“this Boy can play!” - Bruce Iglauer, Alligator Records.
------
For your enjoyment & listening upon arrival, and during first intermission, entertainment will be provided by Matt Hoyles.

Matt Hoyles gritty guitar, wailing harmonica, mad foot percussion and wickedly expressive vocals combine to create a unique rootsy sound that will get you stomping your feet and clapping your hands like there’s no tomorrow! Hoyles is a compelling entertainer who leaves it all on stage! His musicianship as a guitarist is original, mesmerising and an unforgettable experience.

Matt's debut album TIME was released in Spring to a sold out crowd at Vancouver’s legendary Railway Club; and as Vancouver’s Permanent Rain Press states "Hoyles proves he can pack a lot into one song, let alone a whole album with Time, his passionate, gritty voice and unconventional mish-mash of blues and other elements making for a vibrant and soulful album”.