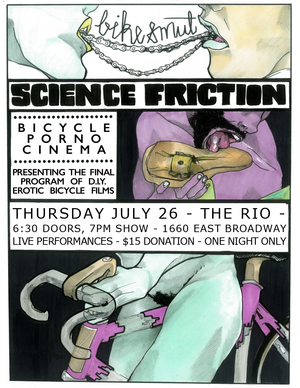 ADULTS ONLY! All attendees must be 19+ with ID

live performances and bonus surprises to end the night. Costumes and frivolous engagement are rewarded!

ONE NIGHT ONLY. It's your only chance to see these films as they are only screened to a live audience, no internet, no DVD.

#SaveTheRio Come out and support your local creative community.

This is the final touring program for Bike Smut. The only way to see it is to attend a screening and experience it with others.

After 9 years of inspiring human-powered, sex-positive cinema Bike Smut is ready to change gears. We have never made DVDs or sell the movies online; the only way to see Bike Smut is when it plays live for an audience. This keeps our filmmakers safe and builds a community atmosphere and creates an opportunity for discussion within each community about important issues surrounding mobility and sexuality.

We never expected Bike Smut would have come this far. 500+ screenings in 25 counties. We don’t want it to stop but change is inevitable. Traveling the world satisfying bikesexuals has provided immense joy and liberation; meanwhile our being transient for a decade has its price. We can’t physically be in all places we want all at once. This brings us to ask; how do we…

… without being present? These are difficult challenges even when we are present in your towns working with local activists.

Our patriarchal, capitalist system demands growth or death. We prefer revolution. The future of Bike Smut is still unknown. Help us write the next chapter.

Share your vision for what the bikesexual future holds.