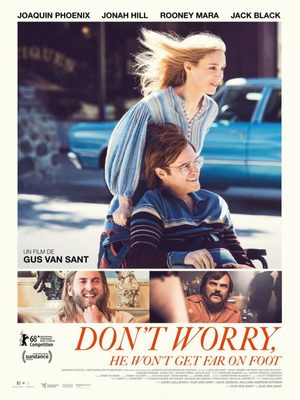 Don't Worry, He Won't Get Far on Foot

John Callahan (Joaquin Phoenix) has a lust for life, a talent for off-color jokes, and a drinking problem. When an all-night bender ends in a catastrophic car accident, the last thing he intends to do is give up drinking. But when he reluctantly enters treatment -with encouragement from his girlfriend (Rooney Mara) and a charismatic sponsor (Jonah Hill), Callahan discovers a gift for drawing edgy, irreverent newspaper cartoons that develop an international following and grant him a new lease on life. Based on a true story, this poignant, insightful and often funny drama about the healing power of art is adapted from Callahan's autobiography and directed by two-time Oscar (R) nominee Gus Van Sant. Jack Black, Carrie Brownstein, Beth Ditto and Kim Gordon also star.

"DON'T WORRY, HE WON'T GET FAR ON FOOT avoids inspirational biopic clichés thanks to sensitive work from writer-director Gus Van Sant and the admirable efforts of a well-chosen cast." (Rotten Tomatoes)

"The film sings with creativity and a feel-good '70s vibe and some fantastic dark humor." (Chicago Sun-Times)

"Joaquin Phoenix and director Gus Van Sant raise the bar when they use roguish humor and bruising pain to color outside the box." (Rolling Stone)

"Leave it to filmmaker Gus Van Sant to make a film about a hopeless drunk who becomes a quadriplegic into a story that's funny, dark, sad, sweet and even sort of inspirational." (Toronto Star)

*Minors welcome in the balcony! Must be 19+ w/ID for bar service and main floor seating.
**Rio Theatre Groupons and passes OK! Please redeem at the door.

DON'T WORRY, HE WON'T GET FAR ON FOOT (Gus Van Sant, 2018 / 113 mins / 14A) After nearly dying in a car accident, the last thing Oregon slacker John Callahan intends to do is give up alcohol. Encouraged by his girlfriend and a charismatic sponsor, Callahan reluctantly enters a treatment program and discovers that he has a knack for drawing. The budding artist soon finds himself with a new lease on life when his edgy and irreverent newspaper cartoons gain a national and devoted following.