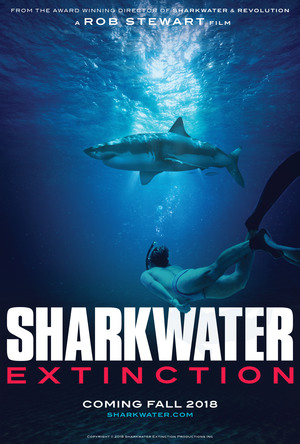 SHARKWATER: EXTINCTION is a thrilling, action adventure journey that follows filmmaker Rob Stewart as he exposes the billion dollar illegal shark fin industry and the political corruption behind it. From West Africa, Spain, Panama, Costa Rica and France, to California, Stewart's third film dives into the often violent underworld of the pirate fishing trade. SHARKWATER: EXTINCTION is a follow up to the critically acclaimed SHARKWATER, Rob Stewart's first film. Shark finning is still rampant, shark fin soup is still being consumed, and endangered sharks are now also being used to make products for human consumption. Stewart's mission is to save the sharks and oceans before it's too late.

"Stewart's third film is also his best... with scenes of marine genocide that should make us all weep tears of rage." (Toronto Star)

"The sharks have lost their greatest fighter and advocate, but Stewart's message, even had he lived, is clear: It's up to all of us now." (National Post)

"Stewart gets his ideas across with a laid-back-dude appeal that will reach kids of all ages, avoiding scientific lecturing and instilling hope even as he's sounding an alarm." (The Georgia Straight)

*Minors permitted in the balcony. Must be 19+ W/ID for bar service and main floor seating.
**Rio Theatre Groupons and passes OK. Please redeem at the door.

SHARKWATER: EXTINCTION (Rob Stewart, 2018 / 90 mins / PG) Discovering that sharks are being hunted to extinction, and with them the destruction of our life support system - activist and filmmaker Rob Stewart embarks on a dangerous quest to stop the slaughter. Following the sharks - and the money - into the elusive pirate fishing industry, Stewart uncovers a multi-billion dollar scandal that makes us all accomplices in the greatest wildlife massacre ever known.